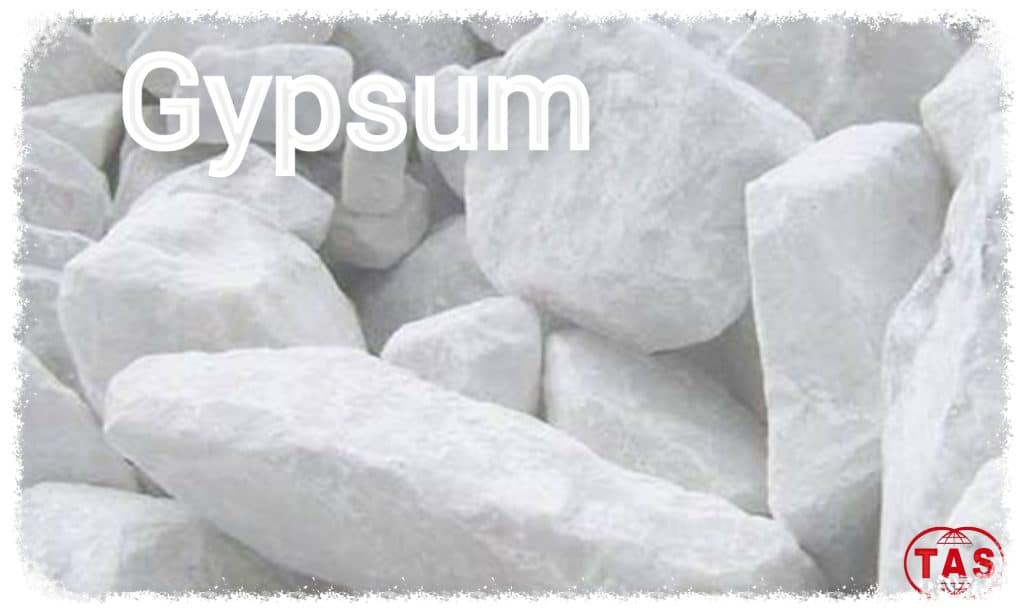 Gypsum is a soft sulfate mineral composed of calcium sulfate dihydrate, with the chemical formula CaSO4.2H2O. It is widely mined and is used as a fertilizer, and as the main constituent in many forms of plaster, blackboard chalk and wallboard. A massive fine-grained white or lightly tinted variety of gypsum, called alabaster, has been used for sculpture by many cultures including Ancient Egypt, Mesopotamia, Ancient Rome, the Byzantine Empire and the Nottingham alabasters of Medieval England. Mohs scale of mineral hardness, based on scratch hardness comparison, defines hardness value 2 as gypsum. It forms as an evaporite mineral and as a hydration product of anhydrite.

TAS Flowrance Group can Supply and Exporter Raw material of Gypsum, Gypsum Rock , Gypsum Lumps Gypsum Powder GypsumRock with high quality of Gypsum Rock uses for many applications and many industrials with Good price of Gypsum Rock or rock Gypsum andGypsumRock from Rock Natural from our Egyptian mines.

Tas Flowrance Group Supply and export outside market shipment bulk 5000 to 15000 ton/ month we can export from any Egyptian sea port in depend on the final destinations.

The Total Capacity of container 28000 Kg for dry 20 feet container. Our staff can handle all steps be going extracting till shipped on board and CFR as customer request

For father test by customers, welcome asking about free samples but shipping cost will be on customers’ accounts. Our Gypsum Rock, favorable and satisfied to all our customers locally and foreign customers.

Please Feeling free if you have any question or inquiry to Contact. Consumer Support. 24 hrs, 7 days a week, 365 days a year.

Gypsum Is Uses And Applications

• Gypsum board is primarily used as a finish for walls and ceilings, and is known in construction as drywall, wallboard, sheetrock or plasterboard.

• Gypsum blocks are used like concrete blocks in building construction.

• Gypsum mortar is an ancient mortar used in building construction.

• Fertilizer and soil conditioner: In the late 18th and early 19th centuries, Nova Scotia gypsum, often referred to as plaster, was a highly sought fertilizer for wheat fields in the United States. It is also used in ameliorating high-sodium soils,[21] such as in the Zuiderzee Works.[22]

• As alabaster, a material for sculpture, it was used especially in the ancient world before steel was developed, when its relative softness made it much easier to carve.

• A wood substitute in the ancient world: For example, when wood became scarce due to deforestation on Bronze Age Crete, gypsum was employed in building construction at locations where wood was previously used.

• Used in baking as a dough conditioner, reducing stickiness, and as a baked-goods source of dietary calcium. The primary component of mineral yeast food.

• A common ingredient in making mead

Gypsum Is Uses And Applications

• A common ingredient in making mead

• In the medieval period, scribes and illuminators mixed it with lead carbonate (powdered white lead) to make gesso, which was applied to illuminated letters and gilded with gold in illuminated manuscripts.

• In foot creams, shampoos and many other hair products

• Used in mushroom cultivation to stop grains from clumping together

• Tests have shown that gypsum can be used to remove pollutants such as leador arsenic from contaminated waters.